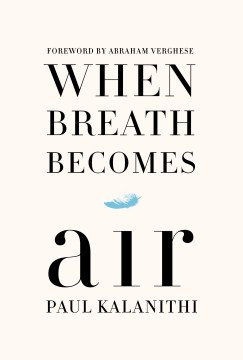 After ten years of medical education, Paul Kalanithi was on the verge of completing his training as a neurosurgeon when he became concerned about his own health. At first he blamed the rigours of residency, but a CT scan soon revealed the worst: cancer in the lungs, spine, and liver. Early in his university career, Kalanithi studied literature, dreaming of a career as a writer, but was driven to medicine by questions about mortality and meaning that he felt could not be answered by literature alone. Suddenly, those questions became urgent and personal, and the only time left to write a book and achieve that dream was now.