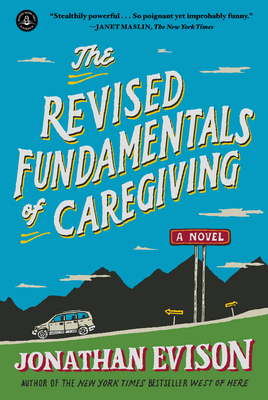 The Revised Fundamentals of Caregiving

"Jonathan Evison has crafted a novel of the heart, a novel of unlikely heroes traveling through a grand American landscape, and most of all, a story that offers a profound look into what it takes to truly care for another person. Bursting with energy and filled with moments of absolute beauty, this bighearted and inspired novel ponders life's terrible surprises as well as its immeasurable rewards."-- Provided by publisher.
Publisher: Chapel Hill, North Carolina :, Algonquin Books of Chapel Hill,, 2013
ISBN: 9781616203177
Characteristics: 1 online resource (288 pages) data file,rda

The unlikely friendship between an unlikely caregiver and a surly teenage boy with severe muscular dystrophy.. Look for the touching, yet funny movie adaptation, "The Fundamentals of Caring."

Benjamin has hit rock-bottom in life when he takes a course in caregiving. He is assigned to a teenage boy with muscular dystrophy, who wants to go on a road trip.

Unashamed to say: the movie was better. This book is a 2.5 stars for me. I didn't hate it but it wasn't anything of what I expected. The man narrator was ridiculous, I didn't like the crude humor, it took too long to get the main story started. The structure was weird--and the climax came with a solid 60 pages still to go. I liked parts but they were only parts.

I received this as part of our library's "Whatcom Reads" Once a year they pick a book by a local author to highlight. The last 2 years books were so great, when given the opportunity to be one of the first to read this years, I enhusiastically said YES. Well written story. You partially know the outcome of one of the stories that are woven through this book, keeps you going wanting to find out what happened. The work he does with the disabled young man is great, coming at odds with his Mom along the way. To me the moral was, it's never to late to go explore! Enjoy. Looking forward to one of his talks next Spring. Great program!!

Funny, tragic, heartbreaking, poignant, forgiving, selflessness....I was not expecting any of this.

It was an unexpected delight.

There are three story lines going on here. One where the main character is the biggest jerk in the world to his soon to be ex-wife; some back story about the family tragedy that leads the main character to supposedly be such a jerk; and finally the relationship of the main character with his client as a registered caregiver. The story line of the main character being a jerk to his soon to be ex-wife is a waste; the back story is shallow and ends in some vague event involving a car and his children which is pointless because it's mostly about him and makes him seems like even more of a jerk; and finally his relationship with his client as a registered caregiver which is very good. Too bad you have to wade through all the rest to get to the good stuff but still the good is worth the bad.

The main character is an irresponsible, immature, infantile, whining jerk. I got so sick of his lack of integrity I gave up half way through. He was so obnoxious, tedious I wanted to wretch. Can't possibly believe anyone can put up with his inability to move on and grow up to be bothered finishing the book. Waste of time; give it a miss.

Despite the character's pathos & sympathetic troubles, I just really didn't start caring for the characters until the second half of the book, when the heretofore much-lauded (and quite rewarding) road-trip takes off. After that, even though the cast of characters grows exponentially, it really takes off & becomes something of an odd cross between National Lampoon's Vacation, Rainman & Zen & the Art of Motorcycle Maintenance. At times hilarious, poignant,bittersweet & even just plain sweet. It can surprise you & even bring you to a few tears as this unlikely cast of characters each find what they really need fromlove to forgiveness,

This is a good summer read. A little over the top in some ways but the story moves right along and is easy to become engaged with the majority of the characters.

I don't know if Confucious really said "Helping Others is the Best Way to Help Yourself", but it was the beginning for Ben. The thing I loved most about this book is that, as damaged as Ben is, he leaves each and every person he meets a little better off than he found them.

From Book Group Buzz blog, post by Misha Stone:
Jonathan Evison, author of All About Lulu and West of Here, has a new novel out, The Revised Fundamentals of Caregiving, and it is fantastic. It is a novel full of wit, heartache and redemption. Benjamin Benjamin is looking at 40 with few job prospects, a broken marriage and losses that would rip the average human being apart. Benjamin takes a job as a caretaker for Trev, a teenager with muscular dystrophy. Benjamin and Trev trade jocular banter as Benjamin shadowboxes with his past. A roadtrip occurs between these two unlikely partners, a journey that changes them both and helps them move forward.

It’s always hard to sum up a book you enjoyed and while comparisons never do a book justice, sometimes they can enlighten someone else to reasons why they should give it a try. The Revised Fundamentals of Caregiving made me think of why I loved the film “Rushmore”–it looks like a silly caper of a movie until you see where its secret and deeply sad heart is buried. Evison’s new novel also made me think of writers like Jess Walter and Jonathan Tropper, two authors that also balance comedy and tragedy on a knife edge. I also loved this book because it captures my childhood stomping grounds–the grungy around the edges Kitsap County towns where people still play darts and smoke dope at parties with strangers and a lonely man can turn himself around despite the odds.