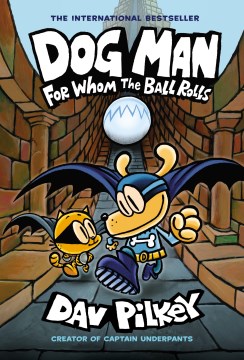 For Whom the Ball Rolls

This is a good comic book. I reccomend it!

i just read it. your gonna love it

Bought it the first day it came out on stores. This book is better than the last one since sometimes I cannot tell the difference between Dog Man #5 and Dog Man #6. The story seems to focus more on the retaliation between Petey and his son Li'l Petey. The jokes are the same as always, and with the same quality.

P.S. Most of these reviews are from people that have not read the book.

I did not read this book or know about it

Lol this is a very good book, im placing it on hold.XDDDD

It's a nice book

orange_tiger_2589 thinks this title is suitable for All Ages

StarStrxk_ thinks this title is suitable for All Ages

(I HAVE WARNED YOU)

Dog Man, who had just let a robber distract him with a ball, is trained by Li'l Petey to focus with the important things, but distractions get the best of him every time.
Meanwhile, Petey is angered with the fact that dogs who had been prisoners, had gotten pardoned by the mayor for heroic actions. But Petey had done heroic actions too, and was not pardoned, so he almost started a cat revolution in the prison he was in, but had just gotten the news that he WAS pardoned.
Now that he was free, he wanted for Lil' Petey to live with him. So he prepared his secret lair for his arrival but is hit by the news of him wanting to live with Dog Man and 80-HD, too.
So, he compromised by letting Li'l Petey live with him on the week, and letting him live with Dog Man on the weekends. But, while being put to sleep, Li'l Petey discovers that Petey's father had abandoned him when he was a child, so Li'l Petey decides to find Petey's dad and make him happy again.
When Petey's dad arrived (I will call him Old Petey), he was rude with Petey and his son the whole time with his very rough manner.
Meanwhile, the FLEAS have turned Big Jim into Commander Cupcake. While obnoxious, he ends up accidentally doing the right thing while running to eat cupcakes. He will be important later.
At Petey's Lair, everyone realizes there is a villian with Burgle Balls on the loose, but Dog Man is now afraid of balls because of Li'l Petey's teaching methods, and Petey and his son come to save the day!
Stuff happens, and The Suppa Buddies win!!!!
Now, returning to the lair, Petey and his son are shocked to find that Old Petey has sold off everything visible in his house, but is fine with it, with all his secret rooms with lots of stuff. After all this, Petey learns to look for the positive and to not look for the negative.

It's really fun and interesting.