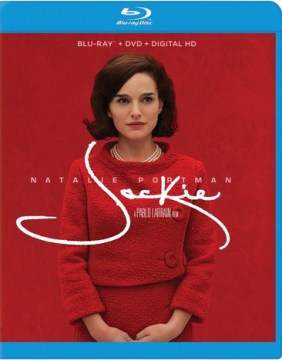 It reminded me of Pulp Fiction which I did not want to be reminded of (brain splattering). Normally I like movies with strong women but this was the exception. It would have helped if Portman was made up to look more like Jackie. The movie portrayed Jackie as a tough, no-nonsense woman: a force to be reckoned with - a total opposite to the sweet-speaking Jackie we all knew and loved. Didn't like it.

It's understandable that this was not a blockbuster movie and I explain why. There is blood and a dead body but cars do not explode, and the blood oozes from president's head and not from a naked body of a bimbo. Also, the “f” word is not used often enough and witches do not travel on the hose of an atomic vacuum cleaner. Many people must have been disappointed also because "Jackie" did not fulfill their expectations, when they hoped for a new conspiracy theory, more smut about the Kennedy family, more graphic showing of Jack Kennedy's affairs or some mishaps during his presidency. Absence of all I mentioned above makes it, clearly, a non- blockbuster, considering the taste of those who still desire to waste money and go to the movies. Objectively speaking, and contrary to what many viewers think about it, this is quite a good movie from the film-making point of view, and probably also from some brainy audience point of view. Granted, this movie is not meant to entertain. It is a serious movie, which reminds us of the time when movie-making was art. It portraits very well the atmosphere after the assassination, Jackie's suffering and pain because of losing her husband and father of her children on one hand, and the sense of responsibility she felt to her country as the First Lady. It is a much better-quality movie than you might expect after reading some of the reviews posted here. The movie would be even better and more impressive had its creators not left out the famous scene from the Arlington Cemetery where little John Kennedy stands next to his mother and sister, in front of the coffin, and salutes.

Just very slow and sprawling. It was agonizing to watch.

Didn't like this at all. Very disappointed in the screen play. Perhaps this is the masculine perspective of a grieving, shell-shocked Jackie ...It drew no sympathy from me.

No pleasure in this dramatization of a portion of the life of Jackie Kennedy. Portman's portrayal was unpleasant and melodramatic. A movie about about a charming lady staring a lackluster actress with no charm.

Hated it. Turned it off.

the Kennedy funeral arrangements as though recounted by Vanity Fair

For the Kennedy fans who want a depiction of yet another perspective to the infamous Kennedy assassination - a wife/mother's perspective. A positive tribute to Jackie. What did the Kennedy clan do to generate gun-toting-sniper enemies - both Robert & John Kennedy were assassinated. That's alot for one family.

Where are the leaders that EVERYONE respects? Can such a leader exist in today's power driven society?

If you can't sleep, this movie will help you!
It is tedious and the sound track is awful. The movie portrays Jackie Kennedy as a vapid, dimwitted woman with a speech impediment.
Go watch the White House Tour available on youtube. It gives you a much better feel for this woman's character.
Although I'm not a Jackie Kennedy fan, she deserves better than this.

This whole film was done in a very interesting way. Excellent score and cinematography... and Natalie Portman was outstanding as Jackie. I liked that it gave a peek behind the curtain of the pristine Kennedy facade... it showed Jackie with flaws, which is a change of pace from how she is usually portrayed. A must see!

I should have been a shop girl or a stenographer. I should have married an ordinary, lazy, ugly man.
-Let me share with you a parable. Jesus once passed a blind beggar on the road, and his disciples asked, "Who sinned, "this man or his parents, that he should be born blind?" And Jesus said, "Neither this man nor his parents sinned. He was made blind so that the works of God could be revealed in him." And with that, he placed mud on his eyes and told him to wash in the Pool of Siloam. And the man did, and he came back seeing. Right now you are blind. Not because you've sinned, but because you've been chosen. So that the works of God can be revealed in you.
===
I was First Lady of the United States. Women have endured far worse for far less. There are two kinds of women. Those who want power in the world, and those who want power in bed.

What did we truly accomplish?
-Maybe Jack will be remembered for the way he handled the missile crisis, or maybe he'll be remembered for having created a crisis that he was then forced to solve. We could have done so much. Civil rights, the space program. Vietnam.
===
Every time I walk by this room, I'm reminded that on January 1st, 1863, an ordinary man signed a document that freed four million people from slavery. So, I don't think of it so much as peaceful as a place of profound legacy.
===
Pretty soon he'll just be another oil portrait lining these hallways.
===
People need their history. It gives them strength. They need to know that real men actually lived here. Not ghosts and storybook legends, people who faced adversity and overcame it. What you've done in this house matters.

We all live on far after our deaths. Presidents will come and go, and every one of them will look up to Jack for guidance, for inspiration.
===
Do you know what I wrote? That I wanted to die.
-I understand.
Do you?
-I do. Unless you are asking my permission.
No, only crass, self-indulgent people kill themselves. No, I was just hoping that if I walked down the street next to Jack's body, maybe someone would be kind enough to do it for me.
- In front of the whole world? Famous life, famous death.
I never wanted fame. I just became a Kennedy.
===
I realized that all the pageantry, all the demands I made to honor him, it wasn't for Jack or his legacy. It was for me.

We aren't most people. Most people don't have to make decisions like that, hours after watching
their husband get murdered next to them.
===
That's what Camelot is about. Ordinary men banding together to fight for a better world.
===
Of course, I think anyone who comes to the White House as a President, uh, desires the best for his country. But I think he does receive a stimulus from the knowledge of living in close proximity to the people who are legendary, but who actually were alive and were in these rooms.
===
You left your mark on this country, Mrs. Kennedy. These past few days, that's the story. Losing a president is like... It's like losing a father. And you were a mother to all of us, and that's a very good story. The entire country watched the funeral from beginning to end. Decades from now, people will remember your dignity and the majesty. They'll remember you.

There comes a time in man's search for meaning when one realizes that there are no answers. And when you come to that horrible, unavoidable realization, you accept it or you kill yourself. Or you simply stop searching... I have lived a blessed life. And yet every night, when I climb into bed, turn off the lights, and stare in to the dark, I wonder... Is this all there is?
-You wonder?
Every soul on this planet does. But then, when morning comes, we all wake up and make a pot of coffee.
-Why do we bother?
Because we do. You did this morning, you will again tomorrow. But God, in his infinite wisdom, has made sure it is just enough for us.
===
What kind of God takes a father from his two little children?
-Thy Lord sacrificed his only son...
And my two babies. Arabella in the womb. And Patrick. Thirty-nine hours on Earth. Just long enough to fall in love with him. What did I do to deserve that?

I was just so happy that he could be proud. Because then I was having a baby, and I couldn't campaign, and then we got in the White House, and all of the things I'd always done, suddenly they
became wonderful. Because anything the First Lady does that is different everyone seizes on. And I was just so happy for Jack that he could be proud of me. Those were our happiest years.
===
I believe that the characters we read about on the page end up being more real than the men who stand beside us. I should have guessed it was too much to ask that we grow old together, see our children grow up. The darkness may never go away, but it won't always be this heavy.