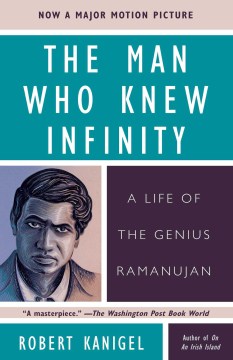 The Man Who Knew Infinity

A Life of the Genius Ramanujan

The book is filled with gems in math and Indian culture. Collected about 16 pages and could have double that easily. Here are just examples:
This is a story, too, about what you do with genius once you find it. Ramanujan was brought to Cambridge by an English mathematician of aristocratic mien and peerless academic credentials, G. H. Hardy, to whom he had written for help.
===
From his mother, Ramanujan absorbed tradition, mastered the doctrines of caste, learned the puranas. He learned to sing religious songs, to attend pujas, or devotions, at the temple, to eat the right foods and forswear the wrong ones— learned, in short, what he must do, and what he must never do, in order to be a good Brahmin boy.
===
“but his mind was free, or, shall we say, was the slave of his genius.”
===
Government College, Kumbakonam, 1904 and 1905 . . . Pachaiyappa’s College, Madras, 1906 and 1907 . . . there was no room for Srinivasa Ramanujan in the higher education system of South India.

The genius of Hinduism, then, was that it left room for everyone. It was a profoundly tolerant religion. It denied no other faiths. It set out no single path. It prescribed no one canon of worship and belief. It embraced everything and everyone. Whatever your personality there was a god or goddess, an incarnation, a figure, a deity, with which to identify, from which to draw comfort, to rouse you to a higher or deeper spirituality. There were gods for every purpose, to suit any frame of mind, any mood, any psyche, any stage or station of life. In taking on different forms, God became formless; in different names, nameless. Among the thousands of deities, most South Indian families tended to invest special powers in a particular one— which became as much part of the family’s heritage as stories passed down through the generations, or its treasured jewelry. ...

The university stayed open, but it was only a ghost of what it had been. Trinity was depopulated, its enrollment plummeting from almost six hundred before the war to forty-seven in October 1916.
===
Ramanujan’s tutor, E. W. Barnes, cast a colder, more bitter light on such losses. In a sermon toward war’s end, he declared: “Of my pupils at Cambridge at least one-half, and practically all the best, have been killed or maimed for life; the work that I did [teaching mathematics over the years] has been for the most part wasted.”
===
Ramanujan, it need hardly be stated, did not. He had no interest in sports; if Hardy tried to interest him in cricket it didn’t take. He had always been fat, largely oblivious to his body, almost pathologically sedentary.

“Oh, my house has not written to me,” Ramanujan replied, using a common South Indian idiom for “my wife.” “Well,” joked Chatterji, though familiar with the idiom, “houses don’t write.”
===
Komalatammal’s side of the conflict does not come down to us, except that, by some accounts, she blamed Janaki, on the basis of her horoscope, for Ramanujan’s ill health; had he married someone else, she was certain, he would not have gotten sick.
===
An Indian marriage was a mating— or a clash— of families. The wife, a newcomer to her husband’s family, was apt to be deemed an interloper, a threat to the household sway long held by her mother-in-law. Besides, she was just a child. Her mother-in-law, who had undergone the same trials when she was a bride, was there to shape her, just as the hard-bitten drill sergeant does new Marines. But here “boot camp,” as it were, extended over years— until the wife bore her own children and then, in the course of time, became a mother-in-law herself.

Of 104 candidates for election that year, he was 1 of just 15 elected. “My words are not adequate to express my thanks to you,” he wrote Hardy. “I did not even dream of the possibility of my election.” In May, he would become S. Ramanujan, F.R.S.
===
Just as India was not alone in attributing creative insights to divine influence, Ramanujan was not alone among mathematicians in holding strong religious beliefs. Newton was an unquestioning believer, felt humility in the face of the universe’s wonders, studied theology on his own. Euler, in E. T. Bell’s words, “never discarded a particle of his Calvinistic faith,” and grew more religious as he grew older. Cauchy was forever trying to convert other mathematicians to Roman Catholicism. Hermite had a strong mystical bent. Even Descartes, that father of Enlightenment rationality ...
===
Ten years older than he, Hardy remained always the parent, a kind and obliging parent, perhaps, but forbidding, demanding, and remote, too.

Combinatory Analysis, which came out in 1916, MacMahon devoted to it and the other identity a whole chapter, “Ramanujan’s Identities.”

“During our generation no more romantic personality than that of Srinivasa Ramanujan has moved across the field of mathematical interest,” wrote American number theorist Robert Carmichael in 1932. “Indeed it is true that there have been few individuals in human history and in all fields of intellectual endeavor who draw our interest more surely than Ramanujan or who have excited more fully a certain peculiar admiration for their genius and their achievements under adverse conditions.”
===
India was a shapeless mass of poverty, of ceaseless struggle for the material necessities of life? Ramanujan, if only reluctantly and only in order to work, shared in that struggle.

Ramanujan’s career, just because he was a mathematician, is of unique importance in the development of relations between India and England. India has produced great scientists, but Bose and Raman were educated outside India, ...

He would probably have been a greater mathematician if he had been caught and tamed a little in his youth; he would have discovered more that was new, and that, no doubt, of greater importance. On the other hand he would have been less of a Ramanujan, and more of a European professor, and the loss might have been greater than the gain.
===
Ramanujan’s brief life and death are symbolic of conditions in India. Of our millions how few get any education at all; how many live on the verge of starvation . . . If life opened its gates to them and offered them food and healthy conditions of living and education and opportunities of growth, how many among these millions would be eminent scientists, educationists, technicians, industrialists, writers, and artists, helping to build a new India and a new world?

" Over the years, Rajagopalachari had followed a straight career trajectory toward becoming a lawyer, while Ramanujan floundered. The two lost contact. But now, in 1910, almost a decade later, they met again by chance in Madras. Despondent, Ramanujan told Rajagopalachari about his school failure. He had no future, he said. No one appreciated him. He'd written a famous mathematician in Bombay, Professor Saldhana, with samples of his work. He'd written the Indian Mathematical Society. Nothing had come of any of it....." "In no photograph of Hardy does he ever look relaxed. Always there's that haunted look in his eyes,like ' a slightly startled fawn, as Leonard Woolf once said of him." " Hardy's intellect was so luminous, he was marked from the start. His success implied a blurring of the British class system, a filtering down into the middle classes of opportunities once largely limited to a thin stratum of society at the top."

From Southern India to the hallowed halls of Cambridge, this genius inspired generations of scholars.

I downgraded this book because I found it stylistically very strange. Although it purports to be a biography of sorts of Indian mathematical genius Ramanujan, it reads more like a portrait of his mentor in England, Godfrey Hardy. As a result, in the movie based on this book, Jeremy Irons steals the show as Hardy, even though the film is ostensibly about Ramanujan, played by Dev Patel. That said, I was glad to have read this book, even though it demonstrated that I have forgotten virtually all the math I learned decades ago as a math major. The book demonstrates that geniuses can come from many backgrounds and certainly do not all come from the West. The book also gave some insight into the ongoing question ofwhat is a genius? For Western-trained mathematicians, the idea that a solution can be reached intuitively without going through all the intermediate steps seems preposterous. Yet Ramanujan was able to do so. Nothing short of amazing!

I approached this backwards – saw the movie, and liked it so much that I decided to read the book. Mistake. Because what I liked in the movie was a glimpse at the young Ramanujan’s intuitive budding genius as a mathematician, his struggle in India to be heard, then his years in England where he personally flourished thanks to Harold Hardy, but struggled against colonial racial prejudice. Beyond that the book contributes a few more details but much of it is filler – Kanigel writes pages of back story for every character or town or building that he introduces. While this information may make for an expanded story, it frequently does not give us any more insight into Ramanujan. Regardless, I’m very much in awe of S. Ramanujan and the legacy he left which is still being studied and analyzed today, 100 years later.

Watched the film which began when Ramanujan was newly wedded (a story in itself) and seeking employment. This book covered in depth about his informal education before Cambridge, his focus on one branch of math, his family background, small circle of friends, Brahmin culture, Madras during colonial days, a lifetime of Math contributions, Indian students in England during early 1900s, elected as Fellow of the Royal Society, years in fighting TB, life after he returned to India before his death at 32 and became a celebrated genius in India and the scientific world. Similarly, the book also provided interesting engagements between Ramanujan and his Cambridge supporters. Last, there are some old photos of major characters, documents and places that brought the story to life, see partial list in "Summary.”

A partial list of old photos of major characters, documents and places that brought the story to life:
-At Town High School, in his hometown of Kumbakonam, Ramanujan was still a conventionally good student, earning prizes and winning praise from his elders. Here, the school’s campus in a recent photograph.
-A recent photo of the Sarangapani Temple, just up the street from Ramanujan’s house, which is visible on the right.
-Ramanujan scored high on this examination, which he took when he was nine. But later, once he discovered mathematics and lost interest in all else, he regularly failed his exams. (Here, the English spelling of his Tamil name was rendered as Ramanujam.) Ragami’s Collections, Madras, South India
-Ramanujan’s house, on Sarangapani Sannidhi Street, Kumbakonam, South India. Once, while in high school, he found that a formula he had thought original with him actually went back 150 years. Mortified, he hid the paper on which he had written it in the roof of the house. Ragami’s Collections, Madras, South India
-The passport photo. Ramanujan in 1919, on his way back to India. “He looks rather ill,” G. H. Hardy wrote when he first saw the photo in 1937, “but he looks all over the genius he was.” Master and Fellows of Trinity College, Cambridge
-The tank, a large ritual pool, opposite the Parthasarathy Temple, the central religious shrine of the Triplicane district of Madras. It was in Triplicane, down the street from the tank, that Ramanujan lived in the period before he left for England.