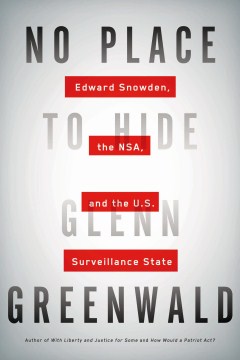 No Place to Hide

Edward Snowden, the NSA, and the U.S. Surveillance State

"Investigative reporter for The Guardian and bestselling author Glenn Greenwald, provides an in-depth look into the NSA scandal that has triggered a national debate over national security and information privacy. With further revelations from documents entrusted to Glenn Greenwald by Edward Snowden himself, this book explores the extraordinary cooperation between private industry and the NSA, and the far-reaching consequences of the government's surveillance program, both domestically and abroad" -- from publisher's web site.
Publisher: New York :, Metropolitan Books/Henry Holt, 2014
Edition: First edition
ISBN: 9781627790734
162779073X

This book offers no insights whatsoever, which is particularly surprising given that the author actually worked with Snowden to release part of the information taken from the NSA. The author is definitely more "activist" than objective journalist, and as such, comes across very strongly in the second half of the book with his own specific agenda. I found the author extremely arrogant, and not very compelling, in his avid pursuit to make a case against the U.S. government in general. Perhaps it's unreasonable to think he would be objective in his portrayal of these events -- after all, Ed Snowden specifically and intentionally approached Greenwald knowing he would be sympathetic to his cause.

The 1st section of the book that covers Greenwald's interactions with Snowden reads like a political thriller. It was intriguing. The rest of the book was still very interesting and informative, but there were parts that felt a little heavy handed. I finished the book not completely trusting the author. I think most of his information was true, but there were times it felt delivered with an agenda.

I rented this after seeing the film "Snowden" which is an excellent film. This book, however, is incredibly boring. The author (played by Star Trek's new Spock in the film) spends 80% of the book talking about his meetings with Snowden and what transpired in great detail. But when most of that detail has nothing to do with the government spying on the world, there's no point to it. It's just fluff. Another 10% is mired down with tables and figures which don't really add to the why's and how's. The last 10% gives the facts of how the US government spies on the world and how they've misused that information. But I got a better view of it from the film. So the book's pretty bad.

It would've worked much better had the author stuck to what Snowden told him and how it all unfolded, NOT his personal meetings with Snowden in such great detail. But then he couldn't have charged as much for the book. Boring. Thank God I didn't buy this book.

Captivating, thrilling, and terrifying. Greenwald knows how to tell a story, and I'm definitely going to read more about government surveillance, technology, and the threat to our (online) privacy. For Laura's perspective, watch Citizen Four after reading this.

A must read especially in light of the most recent US election. Beware, you are not safe being on line no matter how much safety you try to implement.

Most provocative book to be written in the past 10 years. A must read.

This is a must read for citizens of the five eyes. It cuts through the demonization of Snowden, alerts us to the extent of the surveillance that takes place globally, and warns us of the complicity of the media and internet elites. The false threat of terrorism is illustrated and its utility for forwarding repressive legislation exposed. Greenwald, like Snowden has done us a favour if we believe in open democratic governance.

If only the U.S. government was made up of people even half as decent as Edward Snowden!

America would be a much better place. Instead this book illustrates how our own government is our worst enemy!

The decency of Edward Snowden and all he sacrificed to disclose the horror of what he discovered working for our government,demands admiration.

No Place To Hide is a gripping read,like reading a spy thriller!

I have no doubt that the CIA would murder him if they could get to him,so I wish him safety,and a long life,and future happiness.

After seeing Laura Poitras' excellent documentary "CitizenFour" recently about her and Glenn Greenwald's meetings with Edward Snowden in Hong Kong (hopefully VPL will order the DVD), I decided to finally read Greenwald's "No Place to Hide" - which provides a lot more detail about the months before Poitras and Greenwald met Snowden in Hong Kong. The second half of the book that details the information in the NSA documents and the implications on everyone's privacy, no matter where you live, is riveting. I could easily read this book again. Anyone concerned about their privacy online should read this well-written book.

The Fourth Amendment is very clearly written and no amount of "interpretation" can change its meaning or intent. Greenwald's book is likewise succinctly written and his intent is easy to understand: to expose the crimes of our government. In the name of "combatting terrorism" the NSA and other branches of government routinely violate the Constitution. And to cover up these crimes they lie with impunity and with the collusion of the mainstream media. The evidence presented by Snowden through Greenwald is overwhelming. Excellent.

The day after the package arrived, during the week of May 20, Laura told me we needed to speak urgently, but only through **OTR (off-the-record) chat, an encrypted instrument for talking online securely**. I had used OTR previously, and managed to _install the chat program (macOS/linux: Adium®), signed up for an account_, and added Laura’s user name to my “buddy list.” She showed up instantly. ++page 16++

The email began: “The security of people’s communications is very important to me,” and *its stated purpose was to urge me to being using **PGP encryption*** so that “Cincinnatus” could communicate things in which, he said, he was certain I would be interested. **Invented in 1991, PGP stands for “pretty good privacy.” It has been developed into a sophisticated tool to shield email and other forms of online communication from surveillance and hacking.** ++page 7++

The contact came in the form of an email from someone calling himself **Cincinnatus**, a reference to *Lucius Quinctius Cincinnatus*, the Roman farmer who, in the fifth century BC, was appointed dictator of Rome to defend the city against attack. *He is most remembered for what he did after vanquishing Rome’s enemies: he immediately and voluntarily gave up political power and returned to farming life. Hailed as a “model of civic virtue,” Cincinnatus has become a symbol of the use of political power in the public interest and the worth of limiting or even relinquishing individual power for the greater good.*

On **December 1, 2012**, I received my first communication from Edward Snowden, although I had no idea at the time that it was from him.

Contents
Introduction
1. Contact
2. Ten Days in Hong Kong
3. Collect It All
4. The Harm of Surveillance
5. The Fourth Estate
Epilogue
A Note on Sources
Acknowledgments