Saved Searches Advanced Search
The San Bruno Public Library is open to the public Mon.-Fri., 11am-1pm and 4pm-6pm and Saturdays, 10am-12pm and 3pm-5pm. We are also offering holds pickup only service Mon.-Fri., 2pm-3pm, and Sat., 1pm-2pm (no appointment needed; bring library card to front door). Visit  sanbrunolibary.org or contact us at sbpl@plsinfo.org or 650-616-7078 for more information. The bookdrop is open every day for drop-off.
Print 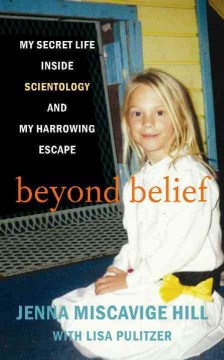 My Secret Life Inside Scientology and My Harrowing Escape

Jenna Miscavige Hill, niece of Church of Scientology leader David Miscavige, was raised away from her parents at the Ranch, a San Jacinto, California, boarding school for children of Scientology executives. In Beyond Belief, Jenna shares her true story of life inside the upper ranks of the sect, details her experiences as a member of Sea Org, the church's highest ministry, speaks of her "disconnection" from family outside of the organization, and tells the story of her ultimate escape in 2005. In this tell-all memoir, complete with family photographs from her time in the Church, Jenna now helps others leave the organization and offers an insider's profile of the beliefs, rituals, and secrets of the religion that has captured the fascination of millions, including some of Hollywood's brightest stars, such as Tom Cruise and John Travolta.
Publisher: Thorndike, Maine :, Center Point Large Print,, 2013
Edition: Center Point Large Print edition
ISBN: 9781611738070
1611738075

This book left me utterly baffled, I was BEYOND BELIEF. I had always heard negative reports and murmurs on Scientology but only knew the bare minimum on this religion.

This story is quite compelling considering this is the story of the niece (Jenna Miscavige) of the current leader of Scientology, David Miscavige, who took over after L. Ron Hubbard died (the founder). Per the Scientology website, it seems that David Miscavige is heralded as the individual responsible for expanding the religion. Per the book, it seems that David was responsible for making the church even MORE strict, particularly for those in the elite group of Scientologists, the Sea Organization (or Sea Org for short). It seems the changes enacted by David led to many high-ranking members leaving the Church and denouncing David for many alleged cases of abuses.

As a side note, the Scientology website claims Scientology is the fastest-growing religion in the 21st century. This is entirely untrue. Per the Pew Research Center, Islam is the fastest-growing religion, this is mainly based on demographics (2017). Statistics on Scientology are a bit harder to find. From the ARIS Reports, you see a decrease in Scientology from 2001 to 2008, from 50,000 to 25,000 in the United States. The Atlantic did share an interesting article from 2016 stating that in Taiwan Scientology was rising. Perhaps we will give the Scientologists some credit; it seems they were using to their advantage that L. Ron Hubbard claimed to be a new Buddha.

Besides the many non-truths that can be seen from the Scientology website, Beyond Belief, takes you through many of the confusing rules that govern Scientologists, particularly for Sea Org Members.

Through Beyond Belief, Jenna takes you through her cognitive dissonance during her many years in the Sea Org. You get a firsthand account of her revolting against Scientology and the times she tried her hardest to be the perfect Scientologist. Jenna is candid with regards to the amount of brainwashing she experienced. She shares with the reader that for a good portion of her time in the organization she would have never believed anyone who spoke ill of Scientology. And explicitly states that for her to leave she had to realize, largely on her own, that the Sea Org was an abusive and unhealthy environment.

I think the most beautiful thing I got out of this heralding journey of Jenna’s, was the importance of friendship. When everything else is taken from you, it is the relationships you develop with the people around you that will help you get through what life throws at you. It is nearly impossible to make it through any of life’s hardships without kin around you to support you through it.

“Friendship is unnecessary, like philosophy, like art… It has no survival value; rather it is one of those things which give value to survival” — C.S. Lewis

While "Beyond Belief" was a quick enjoyable read, it was written in a simplistic repetitive style reminiscent of a school essay.

However, the author's writing style lacks real passion until the last 10 or so pages of the book. It difficult to know how to respond; it seems like the human rights violations haven't been stopped but there also really isn't a call to arms.

If you are interested in the nitty-gritty day to day details of the inner working of Scientology, this book is for you.

I had never heard about Scientology before, until I read this book. I was in complete shock and disbelief that this is what someone had actually lived.

I enjoyed the way her story was told and the honesty that she shared in her book. I did find the book a little repetitive, therefor I would often skip a few pages in the book.

Regardless I would still highly recommend this book!!

The story really is almost beyond belief. Makes me so incredibly grateful that I never fell prey to scientology and it's minions. L. Ron Hubbard was someone I despise. And those who took over his work--same thing.

This book was ok. Didn't' love it. I preferred Leah Remini's book on Scientology much better.

Such a good book! I am amazed at some of the things the author had to go through before she was finally able to leave the church.

Eerie and compelling. Jenna Miscavige Hill's lineage is elite - David Miscavige, current leader of Scientology, is her uncle. That makes this story even more bizarre - someone from that family leaving the church, and other relatives of David's also leaving, exposes Scientology for what it really is - blatant brainwashing. The writing is rather wooden, but the story told is fascinating.

You'd think a book written by the tiny overlord's niece would be more revealing and reflective of the inner workings of scientology and its impact on human beings. But maybe Jenna's ghost writer just didn't have the words or the scope to tell a more interesting story than this. I didn't learn anything new about scientology here, but it might be a good place to start for those just learning about this insane organization. It's definitely easier than reading any drivel L. Ron ever wrote.

Grrrreat! Another // tell-all \\ book on the church of scientology - - only in thoroughly dumbed down America! Next up, a tell-all book on Felix the Cat? Mickey Mouse?

If even half of what Hill writes about her uncle David Miscavige is true, then it is shocking a grand jury hasn't been convened to investigate whether charges should be laid. This woman doesn't have an agenda. Hers isn't just an ordinary plea for help. It is well worth reading.

Jenna Miscavige relates the story of her childhood in one of the world's most notorious religions. As a young girl she suffered malnutrition, hard labor, and was left uneducated in the name of her faith's leader, the science fiction author L. Ron Hubbard. As the niece of Scientology's current leader, David Miscavige, Jenna offers an insight into the community of this religion that few can give to the curious onlookers who wonder.