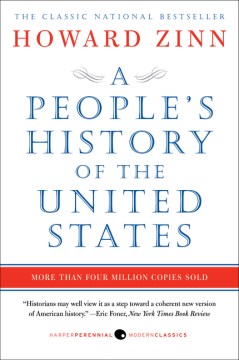 A People's History of the United States

Baker & Taylor
A revised edition of the American Book Award-nominated chronicle of U.S. history is told from a grassroots perspective and provides an analysis of important events from 1492 through the current war on terrorism. Original.

"A wonderful, splendid book&;a book that should be read by every American, student or otherwise, who wants to understand his country, its true history, and its hope for the future." &;Howard Fast

Historian Howard Zinn&;s A People&;s History of the United States chronicles American history from the bottom up, throwing out the official narrative taught in schools&;with its emphasis on great men in high places&;to focus on the street, the home, and the workplace.

Known for its lively, clear prose as well as its scholarly research, it is the only volume to tell America's story from the point of view of&;and in the words of&;America's women, factory workers, African-Americans, Native Americans, the working poor, and immigrant laborers. As Zinn shows, many of our country's greatest battles&;the fights for a fair wage, an eight-hour workday, child-labor laws, health and safety standards, universal suffrage, women's rights, racial equality&;were carried out at the grassroots level, against bloody resistance.

Covering Christopher Columbus's arrival through President Clinton's first term, A People's History of the United States features insightful analysis of the most important events in our history.&#160;This edition also includes an introduction by Anthony Arnove, who wrote, directed, and produced The People Speak with Zinn and who coauthored, with Zinn, Voices of a People&;s History of the United States.

Search youtube for Mary Graber The Influence of Howard Zinn’s. She does a good job of laying it out. It doesn't have anything to do with being a "Trump supporter" as one review supposes. History is about being factual, and Zinn is anything but.

While I appreciate Zinn telling history from a different perspective than the standard litany of elections, wars, etc., I found it a bit meandering and disjointed. As someone who is not well steeped in history, it was not as easy to follow - or maybe not as easy to overlay with school book history as I would have liked. I preferred "Lies My Teacher Told Me" for insights into the things I didn't learn in school that I should have.

History is like sitting for a portrait with full makeup and only seeing the "good side." That portrait is you, true, but it's also not the everyday you. It's not the business casual or the relaxed you. It's usually you at your most pompous and so it history. Some people only want that story told, and that's what we get taught in school. Schools don't teach about the warts and age spots, but Zinn makes a point of showing us in our realness, not just in our fakeness, makeup and fully lit. Some people only want the "spin doctor" version told. Or, heaven forbid, outright lies and revisionist history. History is too important to leave in the hands of the spin doctors and liars, so Zinn is required reading.

And yet, millions of people would love to immigrate here. I saw this female rioter (protestor, if it makes you feel better) in Chicago (August 2020) with a bull horn, telling rioters and looters that looting is an honest and just way to receive reparations, even though I'm pretty sure none of the looters were ever slaves. Yep, she was real convincing, and a lot of the inner city thugs seemed to agree with her. One guy drove a car (probably stolen) into a Nordstrom's store, creating a large gap in the wall, so the looters could run in and seize and carry away whatever they wanted. You can watch this mayhem on cable news (but not on CNN or MSNBC) which leaves who? I wonder what history books kids today are reading? Zinn is 87 years old (George Soros is 90). But the book is a fun read, and probably one of Bernie Sander's favorites.

As a lifelong history reader and history student, I read this book twice and each time my reaction was the same. It's a dishonest, malignant, ignorant work of a talented propagandist and plagiarist, not a historian. He's got an ax to grind for sure. And what an egotist to put his photo on the cover of a history book. Read it if you want to know how our children are being duped and manipulated into believing the worst about America. Then go read a real historian such as David McCullough, Ron Chernow or Ron Meachum.

All the racist trump supporters are leaving negative comments because they can't handle the truth and it makes them feel sad that they were duped by the ultra wealthy into voting against their own best interests. How many time do you want to vote for trickle down economics? I guess if you don't read real history books and just watch fox news then you never learn from the past.

A socialist history book that is completely misleading and poison about what is true about American history.

" 'THE SOCIALIST CHALLENGE'......For the first time, the sheer biological uniqueness of women was openly discussed. It was liberating to talk frankly about what had for so long been secret, hidden, cause for shame and embarrassment: menstruation, masturbation, menopause, abortion, lesbianism....The CIA had introduced African swine flu virus into Cuba, in 1971, bringing disease and slaughter to 500,000 pigs. A CIA operative told a reporter he delivered the virus from an army base in the Canal Zone to anti-Castro Cubans......the CIA--with the collusion of a secret Committee of Forty headed by Henry Kissinger---had worked to 'destabilize' the Chilean government headed by Salvador Allende, a Marxist who had been elected president in one of the rare free elections in Latin America. ITT, with large interests in Chile, played a part in this operation. The FBI....had sent forged letters, engaged in burglaries (it admitted to ninety-two between 1960 and 1966), opened mail illegally, and, in the case of Black Panther leader Fred Hampton, seems to have conspired in murder....there was an impression of an honest society correcting itself....the limits of the government's willingness to engage in probing into such activities by public servants. The Church Committee conducted its investigations with the cooperation of the agencies being investigated and, indeed, submitted its findings on the CIA to the CIA to see if there was material that the Agency wanted omitted....there is no way to know how much more there was discovered by the committee--the final report was a compromise between committee diligence and CIA caution./ The Pike Committee's report was voted secret by the House. Daniel Schorr leaked its contents and was suspended by CBS. It was another instance of cooperation between the mass media and the government in instances of 'national security.' "

I read this book slowly over several months as the subject matter is often daunting. In my opinion, the history discussed is most relevant and important for everyone to appreciate and understand. It is not the history I learned in school or the national narrative in the media to the date of publication. The writing by Howard Zinn is invaluable and provides a more full understanding of of our nation's history and includes the masses of people that were not so well treated. Plus the effort of groups to be recognized by a Government that should have been more supportive of them vs supporting only those in power. An amazing compilation of our American history!