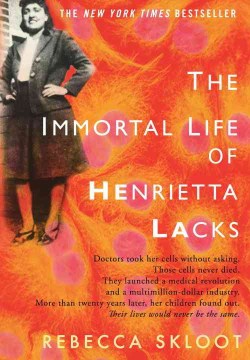 The Immortal Life of Henrietta Lacks

Her name was Henrietta Lacks, but scientists know her as HeLa. She was a poor Southern tobacco farmer, yet her cells--taken without her knowledge--became one of the most important tools in medicine. The first "immortal" human cells grown in culture, they are still alive today, though she has been dead for more than sixty years. HeLa cells were vital for developing the polio vaccine; uncovered secrets of cancer and viruses; helped lead to in vitro fertilization, cloning, and gene mapping; and have been bought and sold by the billions. Yet Henrietta Lacks is buried in an unmarked grave. Her family did not learn of her "immortality" until more than twenty years after her death, when scientists began using her husband and children in research without informed consent. The story of the Lacks family is inextricably connected to the dark history of experimentation on African Americans, the birth of bioethics, and the legal battles over whether we control the stuff we are made of.--From publisher description.
Publisher: New York : Crown Publishers, c2010
Edition: 1st ed
ISBN: 9781400052172
1400052173
9781400052189
1400052181
9781448755899

The story of Henrietta Lacks and her unknowing contribution to science is inextricably connected to the dark history of experimentation on African Americans and the birth of bioethics.

March 2011 "Documents the story of how scientists took cells from an unsuspecting descendant of freed slaves and created a human cell line that has been kept alive indefinitely, enabling discoveries in such areas as cancer research, in vitro fertilization and gene mapping."

“The Immortal Life of Henrietta Lacks,” by Rebecca Skloot is a biography that delves into the unique life of Henrietta Lacks, whose cancer cells remain in use in hospitals till today. Rebecca Skloot, the author, did all the research of Henrietta on her own since doctors kept hidden from her family and others. Henrietta Lacks had cervical cancer which was discovered by doctors when she was pregnant with another child. Her cancer cells were later known as “HeLa” cells, to represent her name. In the early 1900s, doctors were unable to keep normal cells alive for a long time for the laboratory, but Henrietta’s cancer cells were a big investment for curing diseases and they were able to remain alive. Researchers never mentioned her name when they made this discovery but eventually, when she had died, the news had spread. People were earning profit from her useful cells and the family never received any money or regard for this. This book allowed me to acknowledge the fact that discoveries in the laboratory are very remarkable but oftentimes, research has limitations of how much information is given, covering important details of a person and their story. I found the story interesting and I believe that general knowledge about biology is useful since I was able to understand some things better. Overall, it is a book full of research and a personal story about Henrietta Lacks.

In the past sixty years, science has found cures for many diseases, and provided great medical advances. The polio vaccine, gene therapy, and a host of other amazing breakthroughs have dazzled the world. But what was the key that made these discoveries possible? In a word, HeLa. HeLa is the name of an immortal line of human cells first cultured in the 1950’s. But where did these cells come from? From a woman named Henrietta Lacks, a poor black tobacco farmer. And, for the author, it became imperative to tell not only the story of Henrietta, but also that of her family and the scientific advances HeLa cells made possible. This book is part biography, part science journal, and totally absorbing.

What a great book to read. The author did a lot of research and put together the life history of an unappreciated woman.

This was a great read. The stories of Henrietta’s life, the medical discoveries her cells were used for, and the impact that those discoveries have left on her family are woven together in a brilliant fashion. Rebecca Skloot’s writing pulls you into the story and gives everything a great sense of realness. If you’re interested in the world of medicine (and the injustice that arises alongside it), I highly recommend this book to you.

did this for book club

A well-written and researched book about a woman with cancer and what happened to her - or more specifically her cells - during treatment. Her story is astonishing and infuriating at the same time - and one her family didn't discover until decades later.

From the title of this book, the way Rebecca repeatedly referring HeLa cell as Henrietta’s cell, and the uneducated and superstitious Lacks’ family member continually refer HeLa cell is a prove that Henrietta being alive, I have to strongly disappointed with this book and author. Because HeLa cell is Henrietta’s cancer cell, aka anti-Henrietta cell. It has different Karyotype profile and different DNA sequence from Henrietta’s cell, based on “Center of Molecular Medicine and Genetics, Wayne State University School of Medicine, Detroit, US, 2007”.

As the author, Rebecca states in the book that this is a nonfiction book, and a book with facts, I strongly feel that Rebecca didn’t properly did her job. Because she didn’t correct Lacks’ family misunderstanding about HeLa cell; she didn’t states clearly in the book that HeLa cell is not Henrietta’s cell. If she was what she claims to be, then either she didn’t do her proper research, or she tried to persuade the readers to agree with the Lacks family.

The successful of HeLa cell should be contributed to scientists and geneticist’s hard work, because without them HeLa cell just a cancer cell that Henrietta and her family want to get rid of.

Also Rebecca used about 100 pages on Lacks’ irrational behaviour from page 218 to page 304. And the whole book not included “Where They Are Now” “About the Henrietta Lack Foundation” “Afterword” “Cast of Characters” “Timeline” are about 300 pages. So Rebecca spend about one-third of books telling the readers in detail about Lacks’ family reactions. It makes me question what she wants to tell us. How illogical this family are?

If Rebecca really wants to talk about HeLa cell, she should spend more time on those scientists and geneticists, not Lacks family. Because it is not Henrietta Lacks has immortal life, it is her cancer cell, HeLa cell, has immortal life. And it is those scientists and geneticists make HeLa cell famous and useful. Lacks' family didn't actually contribute anything to any of those.

If anyone want to read this book, I strongly suggest "Do your own research".

It was interesting to learn about Henrietta Lacks. If I had known more about science I would have enjoyed the book more.

One never knows how your life (or body) will impact generations to come. This is a story which plunges the reader right into an ethical question. Perhaps because I don’t lack for money, I sympathized with Lacks family but was so impressed with how research was made possible by her cancerous cells. At the same time, if a company is making money from her cells, shouldn’t the family be able to reap some of the benefits as well.

A book recommended for the nonfiction buff. This is a poignant story about a brave lady whose demise 70 years ago still has an impact on the health & welfare of everyone to this day. Henrietta Lacks’ enduring cancer cells have resulted in outstanding breakthroughs in medical research over the years.
It would have been kind & moral for Henrietta's family to have benefited from her unique biological input which has had such positive repercussions in medicine to this very day. I am sure that is what Henrietta would have wished as her last words were in regard to the care & welfare of her young children once she was gone.

gurleen03 thinks this title is suitable for 14 years and over

katboxjanitor thinks this title is suitable for 13 years and over

CarolJ33 thinks this title is suitable for 13 years and over

True story of stolen body pieces of Everywoman Henrietta Lacks. Story readable despite presence of a great deal of science. Adult children search for their mother over years bearing up remarkably in face of medical-science establishment. Exceptional. Highly recommended.

A black woman's self-perpetuating cancer cells live past her own shortened life, providing doctors and scientists with an unparalleled opportunity to do nearly unlimited research. Her family, however, was unaware her cells were ever collected. In this book author Rebecca Skloot takes them on a journey to learn the extent to which their mother's cells changed the face of cancer research forever. Fascinating, and possibly the best work of nonfiction I've ever read.

“But I tell you one thing, I don't want to be immortal if it mean living forever, cause then everybody else just die and get old in front of you while you stay the same, and that's just sad.”

“If the freedom of speech is taken away then dumb and silent we may be led, like sheep to the slaughter.” -George Washington