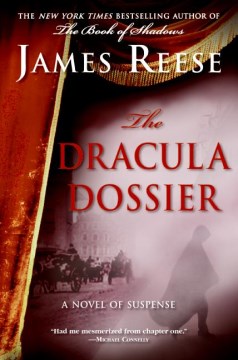 Baker & Taylor
Returning to late-nineteenth-century London in the wake of a career slump, writer Bram Stoker strolls through the impoverished district of Whitechapel late one night and glimpses a familiar doctor slinking away, only to find himself charged with the murder of a prostitute. 25,000 first printing.

Author of the New York Times bestseller The Book of Shadows, James Reese returns with a remarkable feat of literary invention. In The Dracula Dossier, Reese combines real historical figures and events&;Bram Stoker, Walt Whitman, Jack the Ripper&;with glorious speculation in a tour de force of suspense fiction that races non-stop through Victorian London. Bestselling author Michael Connelly raves about The Dracula Dossier, calling it, &;a damn good thriller&;that had me mesmerized from chapter one.&;

Blackwell North Amer
Stalled in his writing career and feeling overwhelmed by his charismatic, successful boss Sir Henry Irving, Bram Stoker returns to London in the summer of 1888 determined to turn his life around.
Late one night Stoker decides to take a stroll through the streets of Whitechapel, an impoverished district of London known for its many prostitutes as well as the citizenry crowding its shadowy alleys. Amid the shadows, he spies a seemingly familiar figure, a man resembling a quack American "doctor" of his acquaintance. But before Stoker can be certain, the man disappears.
Little does he know that just a few steps away, the crime spree of the century has begun: a vicious killer has claimed his first victim, a local prostitute. And Stoker somehow becomes the prime suspect. To clear his name, he enlists some of his illustrious friends, including Walt Whitman, Lady Jane Wilde (mother of Oscar), and the million-copy-selling Victorian novelist Sir Thomas Henry Hall Caine. When they discover that the murder weapon is a Gurkha knife owned by Stoker and recently stolen from his home, there can be no doubt that the elusive American doctor - Francis Tumblety - is the very same man terrorizing and taunting London as Jack the Ripper.

Baker
& Taylor
Returning to late-nineteen-century London in the wake of a career slump, writer Bram Stoker strolls through the impoverished district of Whitechapel late one night and glimpses a familiar doctor slinking away, only to find himself charged with the murder of a prostitute.