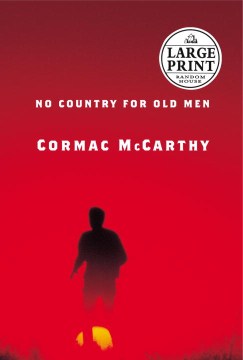 No Country for Old Men

Random House, Inc.
In his blistering new novel, Cormac McCarthy returns to the Texas-Mexico border, setting of his famed Border Trilogy. The time is our own, when rustlers have given way to drug-runners and small towns have become free-fire zones.

One day, a good old boy named Llewellyn Moss finds a pickup truck surrounded by a bodyguard of dead men. A load of heroin and two million dollars in cash are still in the back. When Moss takes the money, he sets off a chain reaction of catastrophic violence that not even the law–in the person of aging, disillusioned Sheriff Bell–can contain.

As Moss tries to evade his pursuers–in particular a mysterious mastermind who flips coins for human lives–McCarthy simultaneously strips down the American crime novel and broadens its concerns to encompass themes as ancient as the Bible and as bloodily contemporary as this morning’s headlines.
No Country for Old Men is a triumph.


From the Trade Paperback edition.

Baker & Taylor
Stumbling upon a bloody massacre, a cache of heroin, and more than $2 million in cash during a hunting trip near the Rio Grande, Llewelynn Moss removes the money, a decision that draws him and his young wife into the middle of a violent confrontation in which their only hope of survival is local sheriff Ed Tom Bell. (Suspense)

Llewelyn Moss is hunting antelope near the Texas/Mexico border when he stumbles upon several dead men, a big stash of heroin, and more than two million dollars in cash. He takes off with the money--and the hunter becomes the hunted. A drug cartel hires a former Special Forces agent to track down ... Read More »

McCarthy's No Country For Old Men is in essence a western, but McCarthy adds many more layers than some of the typical shoot-em-ups that come to mind when you hear "westerns". Chigurh has me horrified as I read, and the sheriff's juxtaposition with such a villain magnifies his kindness and innocence, despite his experience in war. I look forward to delving in many more times to find the smaller details McCarthy may have dropped.

I listened to the audio book. There were 7 discs. At disc 6, it was over. There was an entire 1/7 of the book that had nothing to do with the rest and was really unnecessary. The story idea was interesting, but how it played out and the excessive wordiness of especially the villain was a huge drawback. I can't imagine how the movie got an Oscar, it must have been on acting alone.

No writer has captured the contemporary Southwest with more thunder and aplomb than Cormac McCarthy. His novels depict a vision of an often rugged and violent way of life along the border region of Texas and Mexico, but never has one of his novels taken on a more sinister quality than in No Country For Old Men. The drug war is the center of focus in this suspenseful drama. When Llewelyn Moss finds a briefcase of $2 million at the site of a heroine exchange gone disastrously wrong, he knows that taking the cash will endanger his life. In pursuit to reclaim the money is Anton Chigurh, a psychopath who uses his own maniacal form of justice to deal with those he encounters. With the body count mounting, Sheriff Bell hopes to help Moss while tracking the whereabouts of the ghost-like Chigurh. McCarthy presents a host of characters spanning both sides of the divide between the deranged criminals of the cartels who work like machines in the trafficking of narcotics and the conscientious men of law enforcement who attempt to put a boot in their path. In the end, the drug world’s malignant nature claims the lives of men both good and evil.

Masterful neo-western noir. A breakneck plot that defies conventions. And evil that goes on and on.

The movie complements the novel and vice versa. The book brings better character development; the movie adds intensity to the story.

This is not a geezer flick by any means. The title actually comes from a Yeats poem, which now gives you your daily dose of culture. The book takes place in the lawless country around the Texas desert as if Texas wasnt lawless enough everywhere else. When one of the locals finds a pick-up truck thats been abandanoed, well if you consider everyone in the truck being dead as abandoned, the truck is full of money and heroin. Being the law abiding citizen that he is, Moss just takes the money and leaves the drugs. Even so, he sets off a minefield of unexpected consequences. Hes chased by a ruthless hit man and a criminal who flips coins to make decisions. The Old Men in the title refers in part to the sheriff who cant contain the violence going on around him, including the death of some of his lawmen.
This is one of the more recent books on the list, making it easy to pick up on the paperback racks at your local bookstore. It was also made into a Bruce Willis vehicle that won Best Picture of the year. It was directed by the Coen brothers, which should give you an ideas of the level of gore in it. Read the book first, and then see the movie.
And to be honest, I thought the Coen Brother epic was even better than the book.

There is something wonderfully American about No Country for Old Men. Obviously, the book is set mostly in Texas- but that's not what I mean. What I mean is that the entire time I was reading the book I felt like I could draw a direct line from McCarthy to Palahniuk to Tarantino, etc. Both thematically and artistically, this novel belongs in the cannon of American literature.

I enjoyed the way, in a sense, the reader could see the struggle the author had with certain themes and philosophy. Most notably the conversation between Chigurh and Carla Jean where one could see the antimony of choice versus fate. Of morality versus amorality. Value versus invalue. Old versus new.

I personally found McCarthy's writing style, at times, brutal and difficult to follow. While I enjoyed his minimilistic style, sometimes I wish he would of used charters' names instead of pronouns. Also, I missed quotation marks. Overall, however, I thought this was a great book.

I wish I hadn't seen the movie first: I could not get Javier Bardem out of my head. Other than that, the book is riveting and sorrowful.

If ever there was book that illustrates how a series of an events can turn on a dime and be completely unpredictable it would be the novel "No Country for Old Men." I found this book riveting and the story moved at an impressive clip. Great book and I have a new appreciation for the work of Cormac McCarthy.

Coldly bloody, spiced with the logic of inevitability.

... some teachers come across a survey that was sent out back in the thirties to a number of schools around the country. Had this questionnaire about what was the problems with teachin in the schools. And they come across these forms, they'd been filled out and sent in from around the country answer in these questions. And the biggest problems they could name was things like talkin in class and runnin in the hallways. Chewin gum. Copyin homework. Things of that nature. So they got one of them forms that was blank and printed up a bunch of em and sent em back out to the same schools. Forty years later. Well, here come the answers back. Rape, arson, murder. Drugs. Suicide. So I think about that. Because a lot of the time ever when I say anything about how the world is goin to hell in a handbasket people will just sort of smile and tell me I'm gettin old.

These old people I talk to, if you could of told em that there would be people on the streets of our Texas towns with green hair and bones in their noses speakin a language they couldnt even understand, well, they just flat out wouldnt of believed you. But what if you'd of told em it was their own grandchildren?

I had two dreams about him after he died. I dont remember the first one all that well but it was about meetin him in town somewheres and he give me some money and I think I lost it. But the second one it was like we was both back in older times and I was on horseback goin through the mountains of a night. Goin through this pass in the mountains. It was cold and there was snow on the ground and he rode past me and kept on goin. Never said nothin. He just rode on past and he had this blanket wrapped around him and he had his head down and when he rode past I seen he was carryin fire in a horn the way people used to do and I could see the horn from the light inside of it. About the color of the moon. And in the dream I knew that he was goin on ahead and that he was fixin to make a fire somewhere out there in all that dark and all that cold and I knew that whenever I got there he would be there. And then I woke up.

GeorgeJaxon thinks this title is suitable for 15 years and over

pea46 thinks this title is suitable for 16 years and over