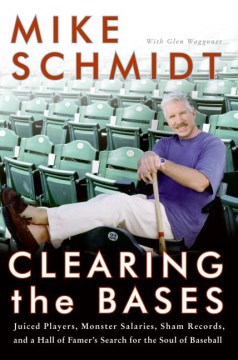 Juiced Players, Monster Salaries, Sham Records, and A Hall of Famer's Search for the Soul of Baseball

Baker & Taylor
An evaluation of the state of professional baseball takes a look at the game's decline from national pastime to national punch line, calling on players, fans, and owners to make things right with what has gone wrong with the game.

Between 1995, when Mike Schmidt was inducted into the Hall of Fame, and the dawn of the recent "Steroid Era," when baseball's biggest names were as likely to appear before Congress as they were to play in the All-Star Game, our national pastime has devolved into a national punch line. Even though the past two years have witnessed the Red Sox' finally putting an end to the Curse of the Bambino and the White Sox' bringing a championship to the South Side of Chicago for the first time in eighty-seven years, the sad truth is that the 2005 and 2006 seasons may be remembered as much for the league's scandals and blockbuster free-agent signings as they are for historic accomplishments on the field. Something has gone horribly wrong with the game, and according to Schmidt, it's time to do something about it.

Clearing the Bases is a much-needed call to arms by one of baseball's most respected players. Drawing on his experiences as a third baseman, a manager, and, most recently, a fan, Schmidt takes on everything from skyrocketing payrolls, callous owners, and unapproachable players to inflated statistics, and, of course, ersatz home run kings. With bold and spirited counsel, Schmidt offers his own prescription for restoring integrity to the game and bringing baseball back, once and for all, to its rightful place.

More than just an old-timer's screed against the modern game, however, Clearing the Bases goes beyond the BALCO investigation and never-ending free-agent bonanzas that dominate the back pages. It also examines all that's right -- and what still needs work -- with our national pastime, including interleague play, expansion, and, most surprisingly, better all-around hitters.

Riveting, wise, and illuminating, Clearing the Bases is a Hall of Famer's look at how Major League Baseball has lost its way and how it can head back home.

Baker
& Taylor
A thought-provoking evaluation of the state of modern-day professional baseball by the legendary Hall of Fame third baseman takes an unflinching look at the game's decline from national pastime to national punch line, calling on players, fans, and owners to make things right with what has gone wrong with the game and offering his own prescriptions for restoring the game. 100,000 first printing.