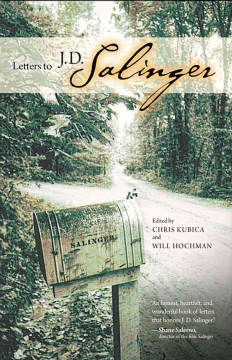 Chicago Distribution Center
He published his only novel more than fifty years ago. He has hardly been seen or heard from since 1965. Most writers fitting such a description are long forgotten, but if the novel is The Catcher in the Rye and the writer is J. D. Salinger . . . well, he’s the stuff of legends, the most famously reclusive writer of the twentieth century. If you could write to him, what would you say?

Salinger continues to maintain his silence, but Holden Caulfield, Franny and Zooey, and Seymour Glass—the unforgettable characters of his novel and short stories—continue to speak to generations of readers and writers. Letters to Salinger includes more than 150 personal letters addressed to Salinger from well-known writers, editors, critics, journalists, and other luminaries, as well as from students, teachers, and readers around the world, some of whom have just discovered Salinger for the first time. Their voices testify to the lasting impressions Salinger’s ideas and emotions have made on so many diverse lives.

Contributors include Marvin Bell, Frederick Busch, Stephen Collins, Nicholas Delbanco, Warren French, Herbert Gold, W. P. Kinsella, Molly McQuade, Stewart O’Nan, Robert O’Connor, Ellis Paul, Molly Peacock, Sanford Pinsker, George Plimpton, Gerald Rosen, Sid Salinger, David Shields, Joseph Skibell, Melanie Rae Thon, Alma Luz Villanueva, Katharine Weber, and many others
J.D. Salinger’s continued silence strengthens the enigma of his life and fuels a growing appetite for answers to the many questions about his fiction and persona. Letters to J.D. Salinger provides a unique opportunity for the many frustrated writers, editors, critics, journalists, scholars and other luminaries who have longed to address the author and pose specific questions about his literary choices and craft. These imaginary letters offer fresh reflections of Salinger’s work. Some consider the way his work touched their own; others reflect on how he influenced society and craft of fiction; still others offer a fresh perspective on Salinger’s life. Taken together Letters to J.D. Salinger both provides a new forum for articulate and thoughful people who long wished to have an opportunity to speak with the reclusive and reticent author and facilitates a fresh and open dialogue and exchange of ideas on Salinger’s contribution to modern American life and letters.

Book News
Kubica's fascination with mail and with the 20th-century American writer cross here as he assembles letters to Salinger from writers and readers, from students and teachers, and from the jdsalinger.com site he runs. Hochman (English, Southern Connecticut State U.) analyzes how the Web has created a new space where non-scholars can respond to literature. Annotation c. Book News, Inc., Portland, OR (booknews.com)