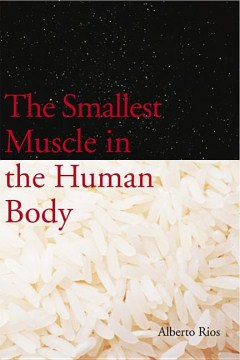 The Smallest Muscle in the Human Body

Baker & Taylor
A magical collection of poems focuses on life in a border town, using fable and family legend to weave a dense, beautiful tapestry of cultures meeting, clashing, and weaving in the borderlands. Original.

Alberto R&#237;os explains the world not through reason but magic. These poems&#151;set in a town that straddles Mexico and Arizona&#151;are lyric adventures, crossing two and three boundaries as easily as one, between cultures, between languages, between senses. Drawing upon fable, parable, and family legend, R&#237;os utilizes the intense and supple imagination of childhood to find and preserve history beyond facts: plastic lemons turning into baseballs, a grandmother&;s long hair reaching up to save her life, the painted faith jumpers leaping to the earth and crowd below. This is magical realism at its shimmering best.

"Alberto R&#237;os is a poet of reverie and magical perception, and of the threshold between this world and the world just beyond. With humor, compassion, and intelligence, R&#237;os's poems overlay a child's observation and imagination onto our society of daily inequity, poverty, and violence. The light of memory shines on culture, language, family, neighbors, and friends saving them all in stories that become legends, a light so sensual and full it is 'swallowed into the mouth of the eye, / into the throat of the people.'"&#151;National Book Award Judges' comments

"Alberto R&#237;os is a poet of reverie... Whether talking about the smell of food, the essence of a crow or a bear's character or of hard-won human wisdom, R&#237;os writes in a serenely clear manner that enhances the drama in the quick scenes he summons up."&#151;The New York Times Book Review

"... Rios's verse inhabits a country of his own making, sometimes political, often personal, with the familiarity and pungency of an Arizona chili."&#151;The Christian Science Monitor

"In The Smallest Muscle in the Human Body, Alberto R&#237;os doesn't borrow a myth. Rather, he finds the myth underlying his own life&#151;myth that translates effectively because it is not confined by language. The images of R&#237;os' life are so vivid, it is as if he has written a picture book that anyone can understand."&#151;The Home & News Tribune

"In his new book of poems, Alberto R&#237;os has given us evidence and motive for celebration. R&#237;os' poems follow a path of wonder and gently move us to emotional truths that grab our breath and link our inner and outer landscapes. His alchemy works a transformation in the inner vision, turning us toward the deeper mystery of life itself."&#151;American Book Review

Alberto R&#237;os teaches at Arizona State and is the author of eight books of poetry, three collections of short stories, and a memoir about growing up on the Mexican border. He is the recipient of numerous awards and his work is included in over 175 national and international literary anthologies. His work is regularly taught and translated, and has been adapted to dance and both classical and popular music.