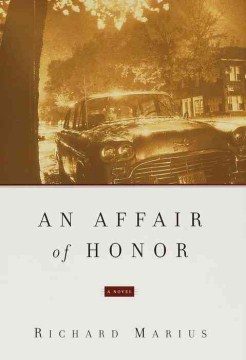 An Affair of Honor

Baker & Taylor
A Bible-obsessed Tennessee town is turned upside down after Charles Alexander, raised to be a Baptist minister, witnesses World War II veteran Hope Kirby kill his wife and her lover, causing a clash between fundamentalist Christianity and the "code of the hills."

Blackwell North Amer
At the center: Charles Alexander, twenty, groomed from birth by his mother to be a Baptist minister, teetering on the edge of his faith. In his last year of college, working late one night at the newspaper office, he accidentally witnesses the murders. The killer is Hope Kirby, World War II hero, member of a large mountain clan of farmers, who has discovered his wife's infidelity. Although Kirby's code of honor requires that he exact vengeance, it won't allow him to kill an innocent bystander, and Charles goes free, promising not to tell what he's seen.
But Charles does tell, and we watch, fascinated, as a trial, an appeal, and a new terror unleashed on the countryside draw the entire country into the action. Among the people most closely involved: the skillful, overweight, hard-drinking lawyer for the defense; two Baptist preachers - one liberal, one a strict constructionist - each with a secret to hide; a lady banker determinedly headed for trouble; a big-hearted good-old-boy sheriff; Charles's disturbingly freewheeling, freethinking sometime college girlfriend. Most importantly, we see the Kirby clan: Pappy, whose extraordinary patience, hard work, and self-reliance cause his hardscrabble farm to prosper until he's turned out by the coming of a national park; and the five Kirby sons, who are trying hard to make a new place for themselves in the town.
As these and others play their parts in the affair of honor, we see Charles and the Kirbys begin to reexamine their dramatically opposing but equally encapsulated ways of viewing life - fundamentalist Christian and ancient "code of the hills." And as the novel draws to its climactic and satisfying close, we see them - and finally the entire town - profoundly, permanently changed.

Baker
& Taylor
The murders of an unfaithful wife and her lover by her husband, Hope Kirby, a much-admired World War II veteran, turn a small, insular, Bible-obsessed Tennessee town upside down as an eyewitness, Charles Alexander, a young man groomed to become a Baptist minister, and the killer examine their opposing ways of looking at the world--fundamentalist Christian and ancient "code of the hills." 15,000 first printing.