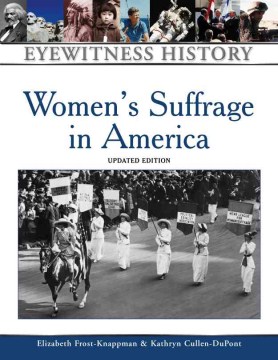 Book News
Part of the Facts on File Eyewitness History series, this book presents diary entries, letters, speeches, and newspaper accounts which illustrate how women throughout the 100-year history of the women's suffrage movement experienced and observed the events of their day. The thirteen chapters are arranged chronologically and cover periods between 1800 and 1920. Each covers a major theme, such as slavery and suffrage, women overseas, women of Seneca Falls, divorce and reform, civil wars, and defeats, and each is introduced with a discussion of the historical context of the primary documents presented and a chronology of events. Also included are capsule biographies of more than 80 important figures, maps showing which states extended suffrage to women during different periods, and 116 b&w photographs. Annotation ©2005 Book News, Inc., Portland, OR (booknews.com)

Facts on File
At the start of the 19th century, women had severely limited rights. They had no control of their earnings, could not divorce a husband, had no claim of property, could not speak at public meetings, and could not vote. The women's suffrage movement, a political campaign that sought to address these problems, began around 1800 and culminated in 1920 with the passage of the 19th Amendment, giving women the right to vote. Led by women such as Susan B. Anthony, Lucy Stone, and Elizabeth Cady Stanton, the members of this movement petitioned Congress, marched, and gave speeches in the face of public disapproval in an effort to achieve their goals.

Women's Suffrage in America, Updated Edition provides hundreds of firsthand accounts of the women's movement&#151diary entries, letters, speeches, and newspaper accounts—that illustrate how historical events appeared to those who lived through them. Among the eyewitness testimonies included are those of Susan B. Anthony, Sojourner Truth, Lucretia Mott, Frederick Douglass, Helen Keller, and John Quincy Adams. In addition to firsthand accounts, each chapter provides an introductory essay and a chronology of events. Critical documents such as the Declaration of Rights and Sentiments at Seneca Falls, the Emancipation Address of the Women's National League, the Constitution of the National Loyal Woman Suffrage Association, and the 19th Amendment are paired with capsule biographies of more than 80 key figures, making this reference extremely engaging and easy to use.