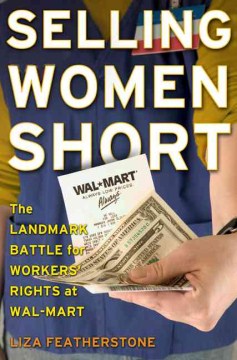 The Landmark Battle for Workers' Rights at Wal-Mart

Perseus Publishing
On television, Wal-Mart employees are smiling women delighted with their jobs. But reality is another story. In 2000, Betty Dukes, a 52-year-old black woman in Pittsburg, California, became the lead plaintiff in Dukes v. Wal-Mart Stores, a class action representing 1.4 million women. In an explosive investigation of this historic lawsuit, journalist Liza Featherstone reveals how Wal-Mart, a self-styled "family-oriented," Christian company:· Deprives women (but not men) of the training they need to advance· Relegates women to lower-paying jobs, like selling baby clothes, reserving the more lucrative positions for men· Inflicts punitive demotions on employees who object to discrimination· Exploits Asian women in its sweatshops in Saipan, a U.S. commonwealthFeatherstone reveals the creative solutions Wal-Mart workers around the country have found-like fighting for unions, living-wage ordinances, and childcare options. Selling Women Short combines the personal stories of these employees with superb investigative journalism to show why women who work low-wage jobs are getting a raw deal, and what they are doing about it.
The groundbreaking exposé of how America's largest employer systematically deprives its female workers of promotions, pay, and job assignments - and how those women are about to change history

Book News
Wal-Mart is the biggest private employer in the United States. It controls the quality, quantity, and prices of household goods in many markets. It fosters a wholesome image through its advertising and in the content of the media it sells. To keep prices low, it keeps starting wages low, but maintains it offers training and promotional opportunities within a corporate culture that rewards dedication and industriousness. However, according to Dukes v. Wal-Mart Stores, Inc., the class-action lawsuit against it, it does not offer those opportunities based on seniority or performance but largely on whether the employee is male or female. Journalist Featherstone examines the conditions that led to the lawsuit, the possibility of its reducing harassment and discrimination in the general workplace, and the impact it may have on the people likely to shop and work at Wal-Mart. Annotation ©2004 Book News, Inc., Portland, OR (booknews.com)

Blackwell North Amer
Betty Dukes is a devoutly religious African-American woman who didn't know the meaning of sex discrimination until she started working for Wal-Mart. She joined the company to get ahead, hoping to become a member of the "Wal-Mart family." But her dedication and effort led nowhere, and this family left her out in the cold. After one too many humiliations, Betty - who still works at Wal-Mart - became the lead plaintiff in the largest civil rights class-action suit in history: Dukes v. Wal-Mart Stores, Inc.
Wal-Mart employees on television appear to be delighted with their jobs, but reality is another story. The average national wage for male cashiers at the company is $8.33; the average for women doing the same job - and often with more experience - is $8.05. The overall difference between male and female managers' salaries is about $14,500. Women are routinely denied promotions, or even the opportunity for further training. Sexist comments and direct insults are a part of daily life in this self-styled Christian company - and single mothers are told to make room for a less qualified man "with a family to provide for."
But the women of Wal-Mart are fighting back. Despite the enormous obstacles of poverty-level wages and retributive punishments from their employer, they have not stopped working for justice. In June 2004, plaintiffs won certification of a class action suit that will cover 1.6 million current and former employees. Journalist Liza Featherstone has followed the women and their lawyers every step of their journey, and in her explosive investigation of this historic lawsuit she brings to light not just the discriminatory practices of the world's largest employer, but the voices and opinions of the workers it has tried to silence.