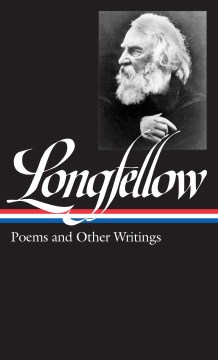 Poems and Other Writings

Penguin Putnam
No American writer of the nineteenth century was more universally enjoyed and admired than Henry Wadsworth Longfellow. His works were extraordinary bestsellers for their era, achieving fame both here and abroad. Now, for the first time in over twenty-five years, The Library of America offers a full-scale literary portrait of America’s greatest popular poet.

Here are the poems that created an American mythology: Evangeline in the forest primeval, Hiawatha by the shores of Gitche Gumee, the midnight ride of Paul Revere, the wreck of the Hesperus, the village blacksmith under the spreading chestnut tree, the strange courtship of Miles Standish, the maiden Priscilla and the hesitant John Alden; verses like “A Psalm of Life” and “The Children’s Hour,” whose phrases and characters have become part of the culture. Here as well, along with the public antislavery poems, are the sparer, darker lyrics—"The Fire of Drift-Wood," “Mezzo Cammin,” “Snow-Flakes,” and many others—that show a more austere aspect of Longfellow’s poetic gift.

Erudite and fluent in many languages, Longfellow was endlessly fascinated with the byways of history and the curiosities of legend. As a verse storyteller he had no peer, whether in the great book-length narratives such as Evangeline and The Song of Hiawatha (both included in full) or the stories collected in Tales of a Wayside Inn (reprinted here in a generous selection). His many poems on literary themes, such as his moving homages to Dante and Chaucer, his verse translations from Lope de Vega, Heinrich Heine, and Michelangelo, and his ambitious verse dramas, notably The New England Tragedies (also complete), are remarkable in their range and ambition.

As a special feature, this volume restores to print Longfellow’s novel Kavanagh, a study of small-town life and literary ambition that was praised by Emerson as an important contribution to the development of American fiction. A selection of essays rounds out of the volume and provides testimony of Longfellow’s concern with creating an American national literature.

LIBRARY OF AMERICA is an independent nonprofit cultural organization founded in 1979 to preserve our nation’s literary heritage by publishing, and keeping permanently in print, America’s best and most significant writing. The Library of America series includes more than 300 volumes to date, authoritative editions that average 1,000 pages in length, feature cloth covers, sewn bindings, and ribbon markers, and are printed on premium acid-free paper that will last for centuries.

Baker & Taylor
Paying tribute to an American literary icon, this collection of Longfellow's the best work from his poems, novels, and essays reveals the secret behind his enormous popularity in the 19th century.

Baker
& Taylor
Selected poems, novels, and essays are included in a collection of the nineteenth-century American poet's works.