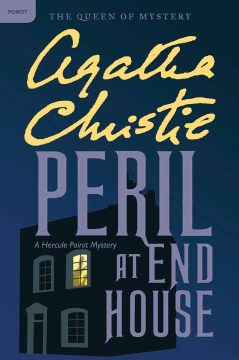 Peril at End House is an enjoyable read and if you are looking for a novel that encapsulates the roaring twenties and the bright young things then you are in the right place. It captures the true spirit of the 1920s and the attitudes of the people who lived it better than other classic novels (i.e.The Great Gatsby) I have read because it all feels very natural and common through the whole novel and sets the tone beautifully. The characters are well done and Hastings is an interesting lens in which we peer through. The plot is good but not as masterful as some of Christie's other novels. The ending is fun and pleasing to the reader. It would be a lovely fall read (october especially) and would pair nicely with a hot chocolate, tea, or cider. This is a novel to be savored.

Poirot and Hastings are together for an adventure unlikely to be found on vacation unless you are Poirot and Hastings. The pace is even with Poirot getting one step ahead of Hastings just when he thinks he is on par. I enjoyed the ending charade of unravelling that Poirot is recognizable for. It is entertaining as he ensnares the culprit (who has no idea they are caught) with an audience. The novel had its funny parts, its predictable pace, and its twists and turns. I found it quite enjoyable from opening to close.

Agatha Christie’s “Peril at End House” is a thrilling tale built around an invigoratingly complex and coherently enjoyable plot that includes many thrills, humor, and super-sleuthing surprises that the Poirot novels are known for and this tale does not disappoint. The reader is reunited with the narrator character of Captain Hastings which is a welcome return to the series as the banter between Hastings and Poirot is magnificent due to that they act as each other’s foil to near perfection. The self-aware humor in this tale is heavy-hitting and effective from early on in the novel and it continues with many memorable and humorous moments throughout; on numerous occasions Poirot and Hastings had me laughing out loud with their clever quips. The characters in this Poirot investigation are all fleshed out and close knit to one another which makes for an enjoyably heightened feeling of intensity to the novel. Of which the humor then plays an excellent part in providing the comic relief as well as in helping to provide a steady sense of pacing. Christie successfully uses her characters to provide interesting remarks on social commentary, spirituality, psychoanalysis, and criminology which are thought provoking and interesting to read especially considering the time period that the novel was published in 1932. Being as this is the seventh book in the Poirot series, the reader can tell that Christie has become very confident in getting across her themes and ideas, and the punches of her surprises are hard-hitting and masterfully created. Christie is even able to parody herself to memorably great effect in this novel which greatly adds to the enjoy-ability of some of the tales biggest moments. Overall this novel is impressive in that it is able to be very complex while still maintaining its coherency, along with that it is greatly benefited by some of the best humor the series has seen so far up until this point of which makes for a highly engrossing and memorable murder-mystery experience.

Pretty good read like most Agatha Christie books not my most favorite mystery but still pretty good.

I have only read the first chapter, but it is eerily like the introduction to most any of the Sherlock Holmes stories. He is obviously her inspiration.

"Peril At End House was surprisingly a great reading experience for me and it is now one of my favourite Agatha Christie novels. The plot and characters are interesting and as usual, Poirot and Hastings continue their typical banter during the investigation. I think Christie's use of fireworks to conceal the noise of gunshots was pretty ingenious. I actually guessed the identity of the killer half way through the book, but it was still surprising when the identity and motive was revealed. "Peril At End House" is a great book and I strongly recommend this for both newcomers and Christie fans.

an excellent novel. I loved it.

I like Christie's writing and Poirot is one of entertainment's great character creations. I haven't read much Christie for decades, but I read this because I like the tv series with David Suchet very, very much. I prefer the tv series in fact, but the books are well worth reading, especially for Poirot fans, they add, to the interest of the now substantial mythos.

I'm a huge fan of Agatha Christie and the Hercule Poirot series, and this one was fairly satisfying. As usual, Agatha Christie works wonders and the ending was shocking, but I feel like the plot was kind of overdone and had a few loopholes. In this one, Hercules Poirot is duped more than once and seems to be a bit below his usual omniscient self, but still, this was an enjoyable read.

i guessed the ending

A good book! But one could easily guess the ending.