Saved Searches Advanced Search
The San Bruno Public Library is offering only virtual programs and services at this time. Visit  sanbrunolibary.org or contact us at sbpl@plsinfo.org or 650-616-7078 for more information. The bookdrop remains open. 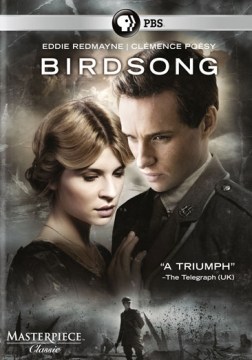 There is no winner in war, period. The brutality and chaos breeds evilness in us.
" War is an exploration of how far men can be degraded."
There is another lesson to be learned from this film: the purpose of living is to love and to be loved.
Powerful acting that captivated your heart!

what facial expressions would we expect from a young man whose love walked away and he now must lead others to horrible deaths? I was not breast-fed, so this sort of movie is forgiven, even a joy, because just viewing without free-tv fuzz is, for me, indescribable (is that a word?).

Very enjoyable. I borrowed the film to see Eddie Redmayne in an earlier time in his career. (Prior to The Danish Girl and Fantastic Beasts) I was not disappointed. He is a fabulous and talented actor; the expressions and feelings he is able to convey are amazing. The movie itself is a Masterpiece. The story line is well developed; the characters are well rounded and you care for them. The story twists through the early 1910's to the end of WWI. A romance is intertwined and scenes flash backed during the desperate times in the war. Excellent movie.

The fundamental story is solid and oft repeated in WWI stories. I found it a bit too slow for my taste in war films. The tunneling scenes were almost the same as the movie Hill 60. The romantic twist was well played and entertaining.

Anyone very familiar with war films and documentaries needn't bother with this overwrought romance. The Battle of the Somme looks like a skirmish in this recreation.

Wow! So gripping and moving! The cinematography is absolutely beautiful. The battle scenes were very moving, I felt like I was down in that crawlspace with them. Good story and fantastic acting. I was glued to this and watched and the whole 2 parts in one sitting! AWESOME.

I enjoyed this movie very much. The love story is a little cheesy, but worth the efforts for the sets, photography, and costumes. The war story is outstanding. Very realistic. Be sure to watch the bonus features.

I found this movie difficult to follow. It flashed back & forth to the war so many times. It was somewhat interesting, I would rate it 3/10. No stars, it wasn't worth any!

Excellent production from start to finish. Big plus to this film is that it does not glorify or romanticize war. Instead, it shows war to be the bloody hell that it is, as well as its utter futility. Scenery and music are beautiful. Acting is good although a little monotonous. Worth seeing for the portrayal of WWI.

Is it just me or does Eddie Redmayne only have one facial expression?

One of the worst 'book to film' adaptions I've seen in a long time. So slow and as someone else said ... the 'smouldering looks' are overused by Redmayne to the point of annoyance and it becomes funny. The storyline was buried in the slow pace and I stopped before the end. Having read and enjoyed the book, I was thoroughly disappointed.

Eddie Redmayne plays Wraysford, a British officer in WWI. I have a feeling that this is one of his best acted movies. We see his acting where he becomes a captive of a hot, passionate, illicit romance with a married, French woman. I say acting because he needs to pretend first in front of the woman that he is not interested, and then later in front of the husband that there is nothing going on. In entirely different scenes, Redmayne experiences the horrors of WWI, which was incredibly deadly and from what I have read, incredibly senseless and stupid (lesson number one). The second lesson, comes from the lips of Firebrace, a subordinate of Wraysford, and comes in the last few minutes of this two part Masterpiece Classic, 165 minute movie.

Heaven spare me any more of Eddie Redmayne's long smoldering looks. His silent, fierce emoting borders on the ridiculous. Every once in a while a PBS production disappoints and this was one of those times--although judged as TV fare, which it was originally, I suppose it might rank better than average.

Very good film overall, although very centered on the romance between the two main characters. I thought that Eddie Redmayne and Clémence Poésy were both spectacular choices as leads though.

As well, on a historical note, the Battle of the Somme was well summed up by Stephen in the movie. Notice the tin plates attached to the soldiers rucksacks going into battle. Just another one of the things that went wrong that morning, along with the early explosion of Hawthorne Ridge, unexplained yet to this day.

War is hell, adultery is fun, except if someone has a baby, war is hell (oh, sorry, we did that), people who give you world-changing advice die thereafter, but you can always go back to your lover's sister and your own illegitimate child. Sorry, what was the point of this movie?

Very well done movie I would recommend this movie for all to see. The characters were interesting and it had a good plot. I enjoyed it. No fast forwarding on this one.